Have a look at the original Plycycle here .

First, it has been a while, more real life has just got in the way....

Back in April I started lacquering the frame. The primer coat went on well as did the first coat. Then the problems started. When cured there were giant runs in the finish. I cut them off (yes they were that bad) and had another go. Again it looked good and smooth as it went on but when I came back the finish was terrible. I ended up pretty much sanding the whole frame back and starting again.

The second time it was July and hot. The varnish went on much more thinly out of the tin and cured faster. It was also well within the recommended temperature all night too. The finish was great, as it was on the Plycycle Mk1, and as I had expected it to be in the first place.

What I learnt was this. Do not rush it. The temp needed to be over 10 deg C. It was when I applied it but in the spring it went down much colder at night. This was not good. If I had actually bothered to think it through properly I would have worked it out and not made a LOT more work for myself.
Applying the lacquer at 22 deg C and an ambient temp of around 15 deg C at night meant that it was all good.

I should point out that my garage where I am doing the work does not have heating and I didn't want to leave an electric heater on over night in there unattended. 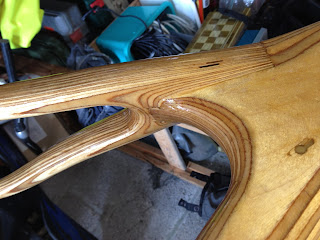 Anyway, the good news is that the frame is now sealed and looks great.

Next job is to fix the dings in the paint work on the metal parts.

ernyberny
I climb and fly for fun. Work in animation.